Why Does Mobile Container App Matters?

Developing a mobile application is one thing and developing for the enterprise is quite a different animal in itself in terms of security, engineering and features which suddenly become hygiene in enterprise scenarios and it only multiplies with increasing number of apps being deployed.

In the current BYOD environment what really is another challenge for users is the sheer number of mobile apps being rolled out and the clutter of apps they on their phones.

Today’s tools and SDKs for writing these kinds of apps are not adequate and hence the need to build a container for mobile apps, which is what DronaHQ 6.0, is. Everyone is looking for a platform to build new apps, and the biggest problem they have is that these apps don’t run on different devices from beginning to end.

Developers run in to problems as they take code they’ve written and tested on simulators and attempt to run it on other OSes. It’s one thing to build a mobile app and another to test and prepare stable apps that run in production and a completely different when they have to run in a secure and controlled enterprise scenarios.

The app is also supposed to span any number of OS versions and devices, it’s supposed to continue running even if Apple/Google/Microsoft launches a new OS which may have breaking changes. The biggest problem is how do developers package the app so that it can be moved around from one device to another and from one OS to another?

Following is the architectural modular diagram of DronaHQ 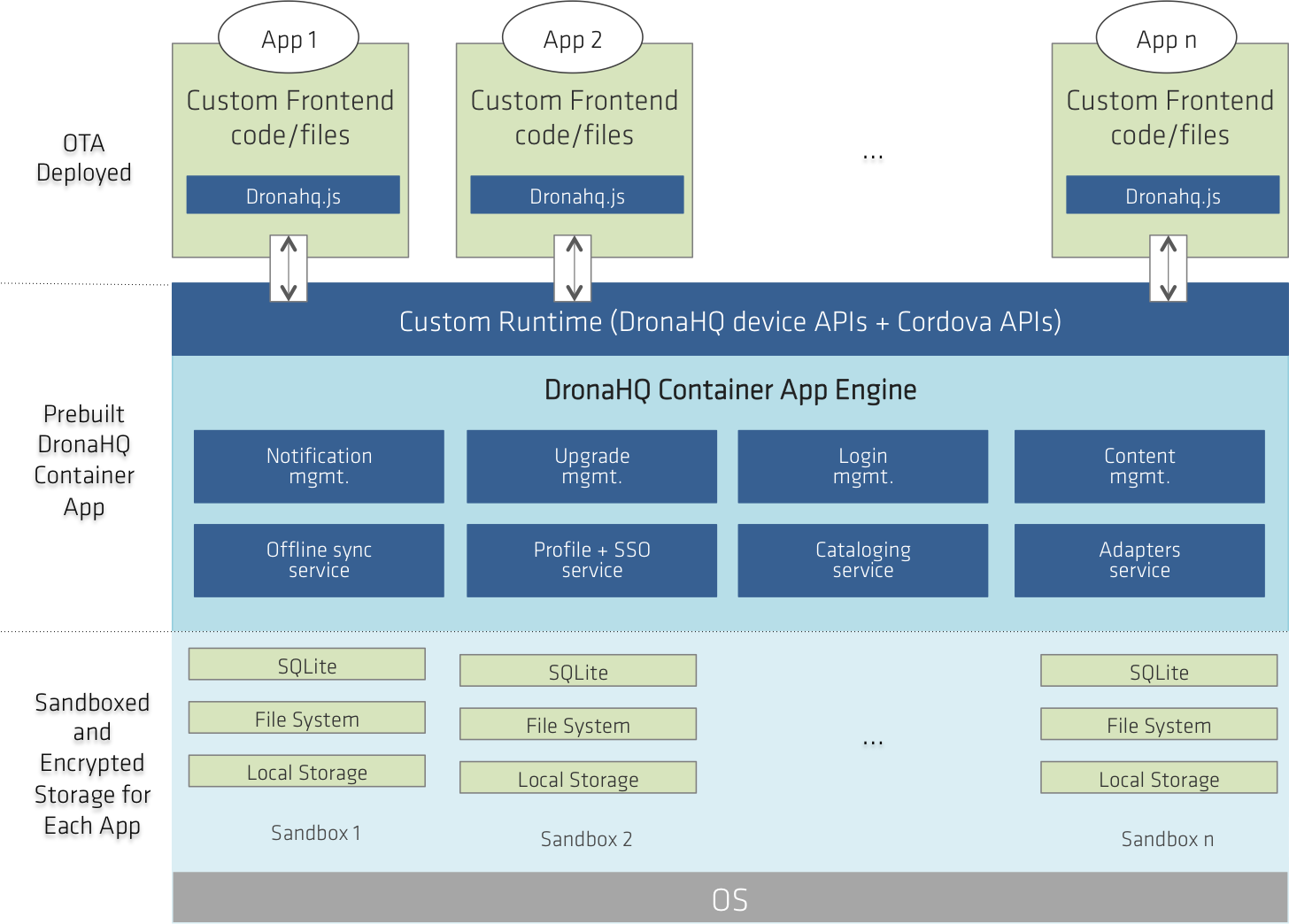 Build, Ship And Run Distributed Applications FasterDronaHQ is creating a huge impact because it simplifies life for developers, they don’t have to know in advance where their apps will end up running. They don’t need to know anything about enterprise grade security, single sign on or worry about enterprise demands like ‘what if my employee leaves the organisation’, ‘what if my employee loses his device’ ‘how is the data at rest and in transit handled’ and so on so forth. All he needs to concentrate on is building an extremely usable experience and beautiful functional app. DronaHQ does all the engineering heavy lifting for them. The job of a mobile app developer is to build good functional apps and not to understand complex enterprise scenarios and policies.The underlying operating system is abstracted away by the DronaHQ run-time, a “very thin layer” that sandboxes the app and makes it portable. Without this layer, an app would have to be written to deal with different operating systems, different environments on the device, differently handled security and a lot of those complexities. DronaHQ is essentially the Docker for mobile apps.

It is generally a known fact that any mobile app takes at least 15 iterations and 9 months to achieve decent stability on devices after the first launch. At DronaHQ we observed that most of these iterations are done on the functional layers like UI and logic which is a completely separate layer on DronaHQ and can be iterated on Over-The-Air giving immense power to a developer to deploy continuously.

The DronaHQ container app is deployed across more than 100 Enterprise customers and has achieved tough stability across thousands of devices, environments, OSes, use cases and has reached a point where developers and business owners are confident that its simply going to work with ‘zero’ issues.

The functional and custom build apps which are deployed on this container will go through its own changes, bug fixes and iterations. Thats where the promise of upgrading the apps OTA without expecting the end users to manually upgrade nor expecting the business owners to relaunch their campaign to make users upgrade. The container app is always in sync with the latest version of apps running on it, not only that but launching new features and new apps is a breeze.

Future group has launched distributed apps from different vendors on DronaHQ container app without worrying about activating users or campaigning and internal marketing to make users download a new app.

Enterprise grade security you can swear by

When it comes to building a security stack in a mobile app, its better to use an already built and battle ready stack rather than reinventing the wheel. On device security stack which is also flexible to enterprise needs is not something every vendor or every team can build, test and get up and running on production in no time passing the penetration tests smoothly. Doing this for every individual app being built is quite a task in itself.

DronaHQ comes prebuilt with a security layer which is not only battle ready but also penetration tested across multiple organisations. Here again as an enterprise the comfort factor is to reuse a proven security layer and let the developers use the same.

Some of the pointers include, ‘how to build security against loss of phone’ ‘how to handle data after user leaves the organisation’ ‘when to use SSL pinning’ ‘how to secure SQLite, file storage and local storage’ ‘When to remote wipe or auto erase data’ ‘what encryption to use’ and many more principles.

Things like a universal download link, forced and optional upgrades, analytics of users who have installed the app vs those who have logged in, the device and OS they are using, role based access to features, ability to beta roll out of features to select users, activate/deactivate users, catalogue management, upgrade management and numerous other features which makes it operationally smooth for business as well as IT operations.

Like before, we prefer developers and enterprises to use a ready stack to features and backend and not reinvent the wheel when it comes to making things work.

Want a Container for all your Enterprise Apps? 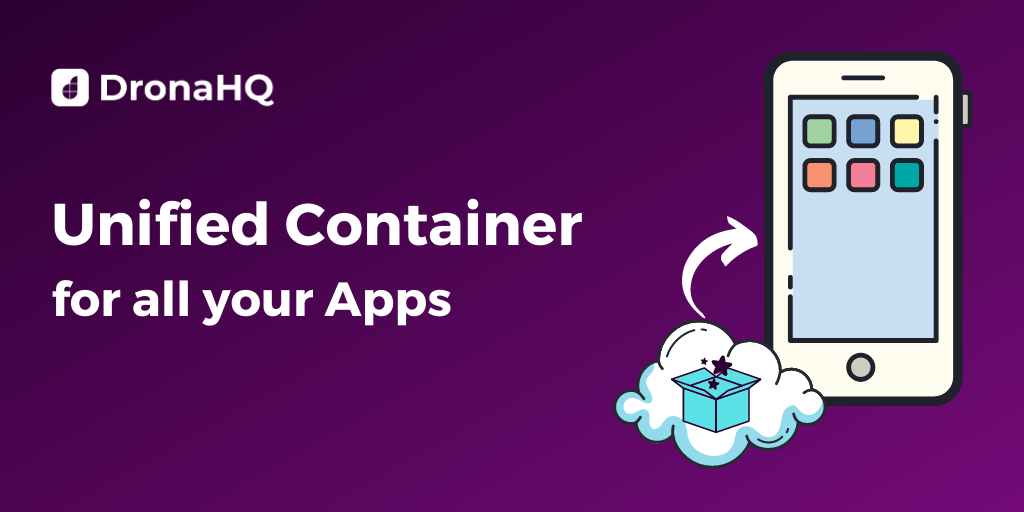 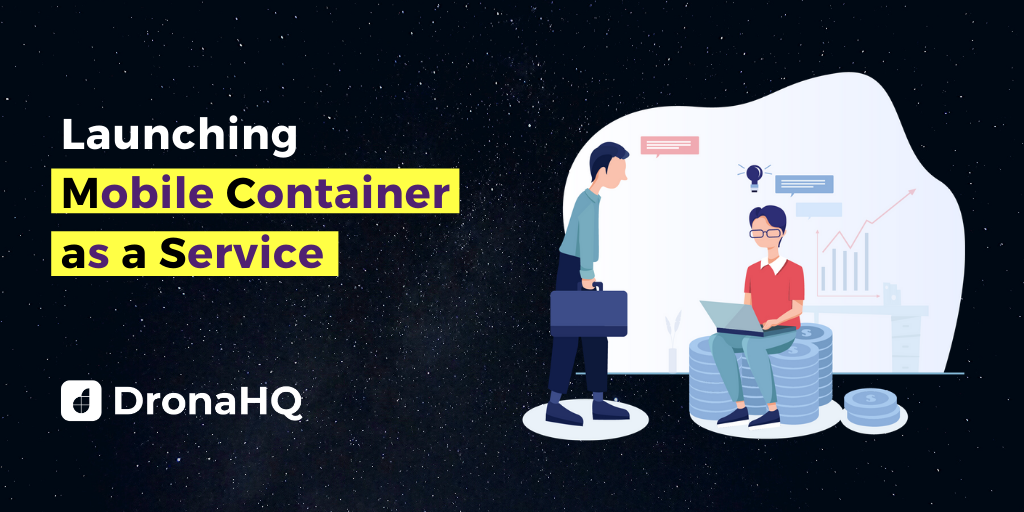