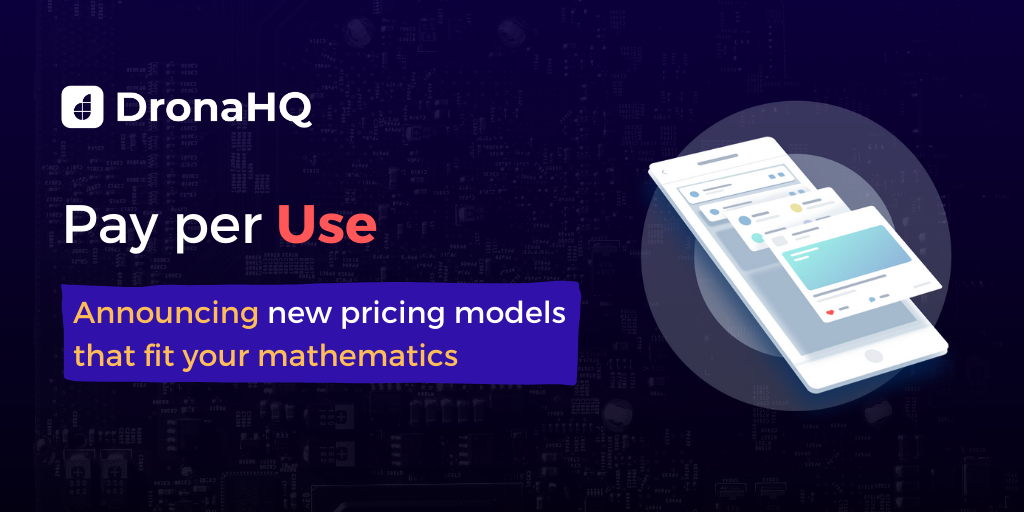 Maybe you wanted to just put a process on autopilot, cut back on email or manual or paper-based flows or maybe you were still experimenting with your ideas, trying to innovate and creatively solve business problems, not knowing how many users will end up using your app.

Whatever it was, chances are good that you needed more flexibility when using a no-code platform to rapidly build apps and know exactly how much you would end up paying.

As an admin user who is building the app, you just want to be able to use the tools to be successful, regardless of budgets. It’s for you that we are here with Pricing Models that both makes success more accessible and reflects the actual value you’re getting back with no-code/DronaHQ.

So what are we doing here?

It’s been a year since DronaHQ’s No-Code platform launched, and we’re excited to announce a new Usage-based pricing plan.

Our new “Pay per Use” pricing allows you to pay depending on app complexity i.e. storage, workflows, data queries, API calls etc, irrespective of the number of users. Add plans as you scale. Or, in shorter terms, the new pricing model gives you exactly the tasks* that you pay for.

The new pricing plan will be effective soon. This blog is here to give you more details on what to expect.

You are building a). a performance review app that is likely going to be used periodically within specific time frames by a fixed number of employees, or b). New employee onboarding app, usage once a day, by the new recruits (variable pool size), or c). a CRM app, usage multiple times a day, every day of the week,  by only a small set of end-users.

Different applications bear varying levels of complexities with a defined or undefined set of end-users. To top that, you may not know how often the application will be opened and used. Why pay per user for every scenario? Won’t it be simpler if you paid only for services you are absolutely sure of?

If you were made to pay $50 per user per month for an appraisal app built for a pre-defined, rather large set of end-users, but having minimalistic usage, maybe once or twice a year, you would probably ask if there was a better way.

Which, there is of course.

So here is what happened

We took into account the kind of applications that customers make to determine our new pricing plans:

b). Complex processes with the form with workflows and automation on top of them

c). An elaborate process automation tool like a CRM or an ERP

“We came out with a mechanism in which customers get to build applications on DronaHQ and pay the amount only for the usage rather than boiling the ocean. They can start with the plan which can probably fit in their mathematics. If I have a team of 1000 where only 10% would be using an app I make, a user-based pricing plan just won’t add up. If that is the prima facie, usage-based pricing would be more apt, giving the customer more flexibility, letting them start with only their app usage requirements,” says DronaHQ Co-founder Jinen Dedhia in this announcement podcast.

Every user who signs up for our Free Trial automatically gets access to our new Free Forever plans offering users to explore the platform with 200 tasks/month, 2 workflows, 1000 records and 1 admin access.

Enterprise plans will also offer per-user base pricing or usage-based and varying other complexities. If you want to have advanced access controls or set up Single Sign-On with SAML connect, Active Directory this is the plan for you. You will have to connect with our Sales team for more information on the Enterprise-grade pricing plans.

The new Usage-based pricing plans will be launched

The new usage-based or the pay-per-use plan is designed to help the admin account holders to start building their apps without worrying about the end-users upfront. We have simplified it into two variables: tasks and data.

Every time you are designing your workflows in the system, you already know what kind of tasks that you will be adding to your apps. That’s a workload for our systems. So, that translates into several tasks that you get.

Another is the amount of data that you can use from our systems. We give you a database as a built-in, baked-in system. We call it data access.

Existing plans for current customers remain as they are.

With these new plans, we have also lined up a bunch of add-ons: an Email Task in Workflow and a PDF Creator.

We also have a newly redesigned pricing page where you can enter the number of tasks needed per month. We’ll use this to recommend the best tier for your needs, as well as an approximation of your effective monthly cost at each volume.

We will soon be launching an ROI calculator to help you evaluate the best plan for you. In the meantime, however, you can contact us at inquiries@dronahq.com if you have any questions or want early access.