4 challenges CIOs need to consider while having a mobile strategy 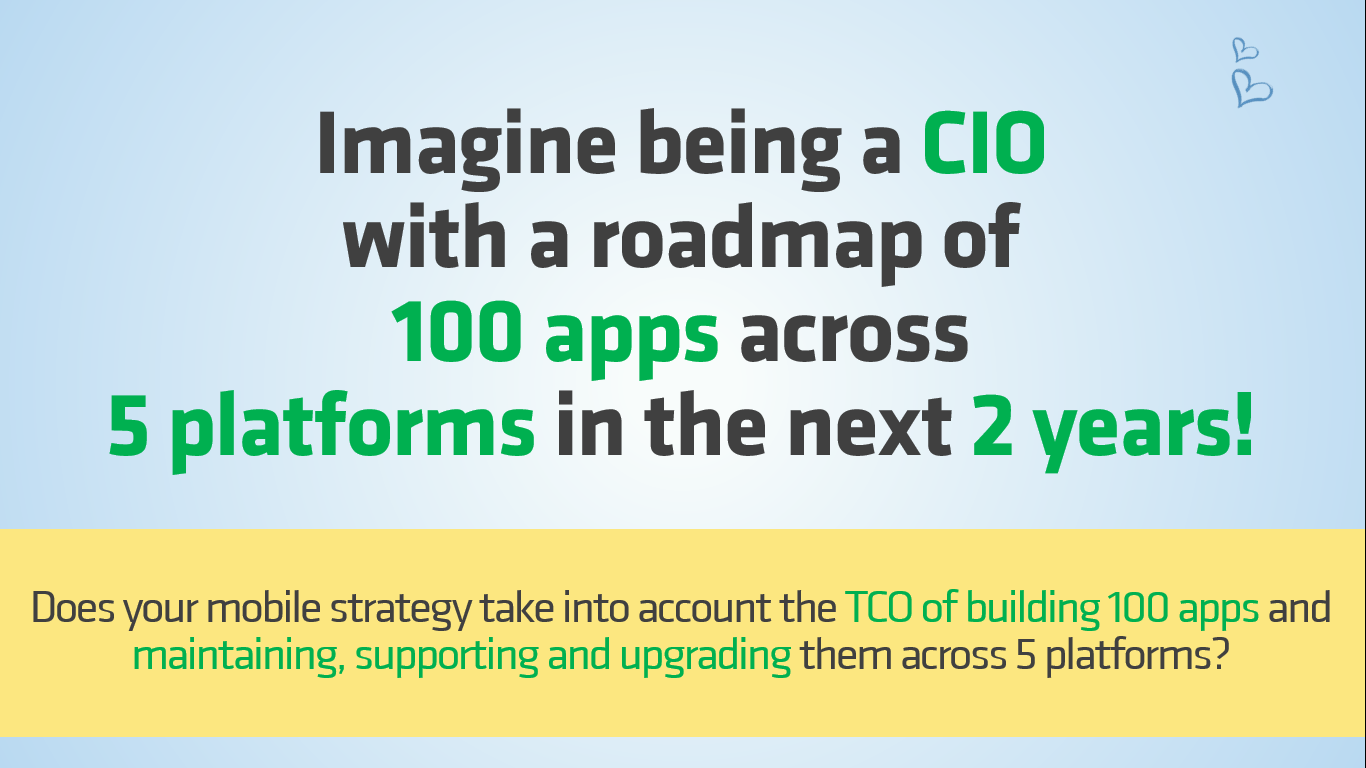 In this connected world the current trend in companies is mobilizing internal apps, processes and workflows. The CIO teams are flush with demands from different functions like sales, marketing, HR, operations, finance or other CXOs on different mobile applications ranging from apps driving productivity to efficiency or even simple information dissemination or dash-boarding apps.
But creating internal mobile apps is a complex proposition mainly because of the following 4 challenges:BYOD and native app development: Creating native apps across basic OSes like Android, iOS, Windows and Blackberry is expensive and can run into 100-200K USD depending on the complexity of the app and that’s just the cost of a single app. Also the time to create these apps can take anywhere from 6-9 months and that’s really exhaustive considering the amount of internal apps any enterprise would have.According to key findings of a survey done by cio.com

“The biggest barrier is mobile development costs, say 65 percent of CIOs. The cost of re-engineering enterprise apps as mobile apps is high because of the ballooning platform fragmentation of the market, particularly the many flavors of the Android operating system”

Support and maintenance of the apps: Imagine rolling out 5 mobile apps and Apple upgrades to iOS 8.0 with critical upgrades which requires a functional change and an app upgrade. Code level changes and redeploying the apps and everything is a huge cumbersome process. Now imagine this being amplified 100s and 1000s of times as enterprises start scaling and deploying more apps.

Enterprise grade security: This is another big challenge with the single sign on, user authentication, user addition and deletion depending on the employee status, content and data security playing a big part in deploying mobile apps that can be accessed everywhere.

Another finding of the survey said

Application management and upgrades With dynamic internal processes, workflows and upgrades the mobile apps need to reflect the upgrades and changes real-time. The complexity only increases with multiple apps being deployed for different group of users across different OSes. A single upgrade in itself is a major task, imagine doing this day in and day out with 1000s of other apps.

Having worked with more than 100 enterprises in mobilizing internal apps we at DronaHQ are addressing all the above concerns with a unique prebuilt platform approach which takes away the ‘develop from scratch’ issues of time, cost and maintenance, security, upgrades and management. Do check some of our customer case studies where DronaHQ as a platform has helped mobilize apps faster.