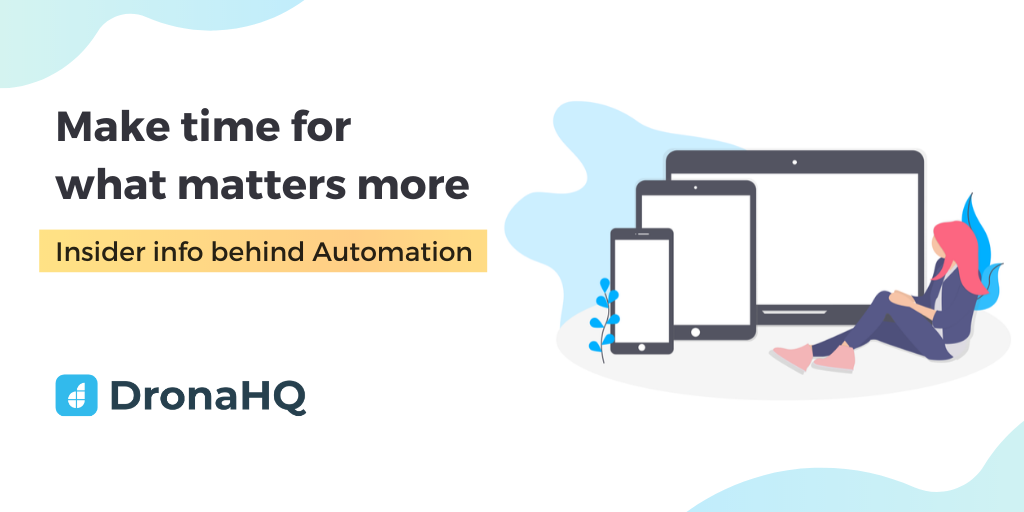 DronaHQ just announced the release of Automation, a new addition to their no-code app development platform to enable scheduling of tasks that otherwise required human intervention.

Here is a chat between the engineering lead behind Automation, Fenil Jain and DronaHQ’s Marketing Director, Kinjal Vora to give you the what, why, how and for who behind the new feature.

You can listen to the interview here:

Kinjal: Hello and welcome to yet another podcast from DronaHQ today. We are going to come up and share something new, which is coming up. And that is Automations. I have with me, Fenil Jain who is heading Automations with us. And he’s here to share his point of view on why Automations and what it is it all about, who is it for and lots more. Let’s get started. Hi Fenil, how are you?

Fenil: Hi Kinjal. Thank you for joining me in. So, today we’ll discuss Automations. So basically Automations, as the name suggests, you know, we’ll be doing lots of engineering overhead without the user’s intervention in between, as in, the manual intervention will be minimal in this case.

Kinjal: Fantastic. So, let’s get two steps behind. What triggered, what was it, why you came up with Automations? We already understand that we have Workflows in DronaHQ.

Fenil: Right. So, if you look at the traditional way how the [DronaHQ Studio] apps work is there is an App where people fill a form and click on the submit button and that is the point where the trigger of the Workflow happens.  So not every time it’s feasible to have that trigger, manual trigger by the end-user. Sometimes there is a need when those triggers need to be done by some actions and in some trigger actions that happen in the background. So, I’ll give a simple use case.

Kinjal: Fantastic. So, you’ve just added one more business element and made life simpler for a lot of businesses out there trying to build apps on this platform. OK, let’s discuss one classic example or a fantastic example where businesses would love using Automations. You have already suggested the Lead App. Some other places where you could explain?

Fenil: Suppose I’m running a product [business], I have a few products, maybe in the B2C domain. Suppose I keep a stock of- list of refrigerators, TVs, electronics or any consumer items. I am maintaining a database where these items are listed. So, assume I want to be notified every time the inventory level goes below 5 so that I can fill up my inventories. So, in this example, you can use Automations to trigger this workflow and notify yourself. Otherwise, you will have to keep on checking your inventories manually

Kinjal: Yeah. So, inventory management is a classic example where you can notify not just yourself, but a lot of other stakeholders as well and probably automatically place orders.

Fenil: Correct. So, I can send out a notification to my just Logistics and they can pick out the orders. Yeah. So similarly, there are other post-customer [order placement] workflows that can be triggered. Whenever a new customer orders it [an item], I get notified using the workflows, or there are other parallel workflows that can be triggered along with it.

Kinjal: So, did this requirement come from the customer or the [DronaHQ Studio] signups that were present in Studio?

Fenil: Yeah. So, we used to provide them with a third-party app – we used to redirect them to, for example, Zapier, which connects DronaHQ with any other third-party application. But then we received more and more such use cases and we felt the need of creating that- an in-house Automation engine.

Kinjal: Fantastic. So, going a little bit into details. How long did it take for you to roll out this feature?

Fenil: The main part of this feature was architecting and implementing how it will work end-to-end. Once the architecture and solutioning were done. It was quite quick for us to implement. So, I’ll say it was roughly two months’ time, by a very small team.

Kinjal: So, what will happen? Is it available to. Is it a GA published release or is it still in testing, beta production? Where is it?

Fenil: I’ll be happy to announce that a small part of Automations which is schedule-based has just gone live.

Fenil: New features which will make [Automation] is much smarter, as I mentioned about [example] whenever a new row is added in the [database] Sheet or updated the inventory value. Those all features will be added very soon.

Kinjal: Great. So, can all of us use Automations at this moment? Or the users who have already made applications on our platform in past can they also add Automations to their applications?

Fenil: Yes. So, all existing live apps which have their workflows enabled. They[users] can create Automations for those workflows. It is available and on the home screen, you will see an Automation tab where you can view and create Automation.

Kinjal: So, give us some secrets and backdoor entries. What is coming next in Automations?

Fenil: So, our next goal is to connect third-party services. For example, if you get the support email and on the basis of that, you want to run a workflow through that. So, you can just connect your Gmail account with Automation, and you will start running your workflows using [the emails as triggers] that.

Kinjal: So, looking forward to using Automations and having the users come back to you and give all the reviews and feedback they have for you.

Fenil: Yes. We are also looking forward to it. So, we do have a community on community.dronahq.com. You can ask you queries over there. If you need live interaction, we have chat enabled, you can share your feedback over there as well.

Kinjal: Thank you so much Fenil for enlightening us about new features coming up in DronaHQ. It was great interacting with you today.